Nepal and China have recently celebrated the 60th anniversary of the establishment of the bilateral diplomatic relations.  Though the two-countries were having interactions along with Betravati treaty on 2 October 1792, the formal diplomatic relations was established only on August 1, 1955. Since then, Nepal tried to give a greater priority and importance to the friendly relations with China not only by firming on its ‘One China Policy’ but also by not allowing any kind of anti-China activities in its soil. China, too, has supported Nepal in the areas of development by being one of the key donors of Nepal and had been generously providing economic assistance to finance various development projects.

If one follows outcomes of Nepal-China relations in six decades, perception of Nepal on China has changed a lot. Nepali ruling elites in the 1960s could see China as guard and guarantor for Nepal’s integrity and sovereignty. That is why many Nepalese were happy to quote speeches delivered by the then Chinese foreign minister Chen Yi in October 1962. Speaking in Kathmandu on the first anniversary of the signing of the Kathmandu-Lhasa road agreement, he said: “I assure His Majesty, King Mahendra, His Majesty government and the Nepalese people, that in any case any foreign forces attack Nepal, we Chinese people will stand on your side.” Such an assurance from China against foreign invasion to Nepal seems to have convinced even the Kings of Nepal so that they started establishing a close personal relationship with China. If follow records of China visit, after King Mahendra made a state visit to China in 1961, his son Birendra repeated China visit as crown prince in 1966, and as king in 1973, 1976, 1978, 1979, 1982, 1987, 1993, 1996, and finally in 2001 just a few months before his murder.

In fact China had initially provided a substantive help not only to rulers in Nepal but also to people to survive in very difficult situation; once India imposed economic sanctions in 1989 it was China which gave Nepal fairly a modest assistance by offering 600 tons of petroleum products out of which aircraft ferried 300 tons during the first months of the crisis and another 300 tons were imported via road to Kathmandu. The amount of assistance had provided a relief as there were limited people to use petroleum products in Kathmandu at that time. Speedy and smooth modus operandi of Chinese contractors and companies also helped create a good image of China in Nepal. However, China could not retain its goodwill in Nepal for long, and many Nepalese particularly the government officers who deals with Chinese counterparts on various occasions started considering China as an unreliable neighbor. Once people knew Chinese motto to earn profit at any cost, a great suspension has been in place in Nepal about its northern neighbor. The following can be considered as some of the reasons:

Firstly, Nepal was having a great expectation and hope from Chinese help to overcome from the crisis Nepal faced along with the Indian blockade in 2015. Though China agreed for the expeditious delivery of 1,000 metric ton of petroleum products to Nepal as grant assistance, it has become only a ritualistic support for Kathmandu against the high demand of petroleum products in comparison to the need of it in 1989.

Secondly, non-implementation of the promises made by China against Nepal’s great hope to recover from the damage and destruction from the devastating 2015 earthquake is another cause of suspension. Initially China had gave a hope by sending Foreign Minister Wang Yi to attend the highest-profile international donor conference and pledged to extend US $760 million (4.7 billion RMB) both grant and loan. Minister Wang also had offered training opportunities for 1,500 Nepalis in the year to come, and a concessional loan from Silk Road Fund from China to Nepal’s reconstruction bid in the conference but nothing has been materialized in two years of the earthquake. Just after International Conference on Nepal’s Reconstruction for post-disaster reconstruction, Chinese Deputy International Trade Representative, Ministry of Commerce had visited Nepal and signed a Memorandum of Understanding for grant assistance of $10 million to be primarily utilized for the upgradation of the roads to Tatopani and Rasuwa, two points on the northern border with China. 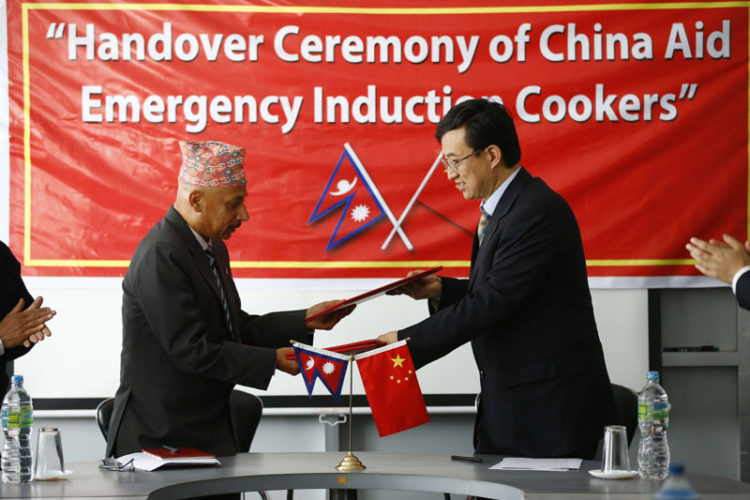 But the government of China handed over 11,300 sets of induction cookers in March 2016 deducting $892,700 from the officially promised relief aid of the government of China to Nepal. Though the reason for providing induction cookers to Nepal was said to be a relief aid for cooking to fuel-strapped Nepal, the cooker has become a big burden for Nepal as the National Trading Limited and the Ministry of Supplies of the Government Of Nepal failed to sell those cookers in the market as the priced become relatively much higher than similar products imported from elsewhere in the market. It is said that they could sell only a cooker within one-and-a half year, but rent for godown to store the materials has already reached 23 million Nepali rupees. That is why government officials started questioning the usefulness of such grant, and context of accepting such useless cookers out of assured assistance to earthquake victims by neighbors.

Thirdly, Aggressive nature of Chinese officials in Kathmandu has been considered another important cause for the weakening Nepal-China relations. Kathmandu people share that some Chinese have gone beyond their limitation and diplomatic ethics which helped delay reconstruction of earthquake-damaged schools in Kathmandu valley.   It is said that no progress have been made by China to construct the historical Durbar School for almost two years even after China agreed and issued the permission of school reconstruction project. In another case China pressured Nepal government to cancel the permission given to a Taiwanese initiative that had already done background works to rebuild Padmodaya High School building in Kathmandu.  The officials of Education Ministry, teachers, and locals including the parents  of those schools express their diligence from Chinese way to creating obstacle in the reconstruction/rebuilding fields once they knew the realities.

It is also said that China tries to impose its own terms and conditions everywhere without trying to understand others’ sensitivity. One might have noticed that China has been pushing Nepal to help initiate a new project-One Belt, One Road (OBOR), with major news coming out from both sides in the name of Nepal reluctance to go with the agreements. It is the OBOR project which is part of China’s new and long-term “strategy for a New Global Financial Order” announced by Chinese premier Xi Jinping in 2013. Generally speaking, there would be no harm to help an immediate neighbor like China for its long-term strategy for prosperity. However, the way Chinese push to Nepal to sign the deal has helped create an anxiety to Nepali side. It is said that China hardly cares about other projects except the OBOR. There is a rumor that China will not make its President’s visit in Nepal unless Nepal agrees to sign the OBOR; nor it was ready to invite Nepali Prime Minister to visit China. Having known to this factor, Nepal government signed a Memorandum of Understanding on the framework agreement with China on May 12, 2017 which is considered as Nepal’s official move to become part of Beijing’s “ambitious plan to revive ancient Silk Road trade routes”.

Likewise, China often states saying that it believes in equality even with small countries, but it has not been ready to do it in practice even with its neighbours. For example, both Nepal and China had agreed to support each other’s tourism promotion activities in their respective countries to enhance people to-people contacts and Nepal offered free visa to Chinese nationals for that matter. But China has not reciprocated it as yet to Nepali citizens. Nepal realized that this visa provision offered to Chinese has become further burden to Nepal in many ways; Chinese tourists are using this opportunity just to access US Dollar by using currency exchange facilities. It is said that the provision which allows Chinese to come as tourist and stay in Nepal for maximum 150 days in a year has been misused by many Chinese tourists and started working in hotels and restaurants . In that case, Nepal had to buy more US Dollar than today and the gap in remittance receiving and sending within two countries is likely to be further widened than earlier. According to report of Remittance flows worldwide in 2015, there is already a huge imbalance in remittance flows between China and Nepal as Nepal received only 500,000 US Dollars from China as against the outgoing amount of 136,000,000 US Dollars to China from Nepal.

Moreover, Chinese reluctance to reopen Kodari highway has forced many Nepalis to rethink their positive perception towards China. It is Kodari highway which had become lifeline of more than a dozen districts of mid-hill region not only to access cheap garment products but also to import construction materials essential to rebuilding project to recover from April 2015 devastating earthquake.  But, China kept showing its reluctance to resume Kodari highway even after making several promises saying that “it will be in operation shortly”. Nepal still expresses its doubt about resumption of Tatopani border point event after promises made by Chinese President in March 2017 during the visit of Nepali Prime Minister Pushpa Kamal Dahal.

After having known to the situation narrated before, one could easily argue that many projects like OBOR are possible with China if the latter is ready to help Nepal to give transit facility so that import petroleum and other essential goods in reasonable price is possible with less hassle. But no government, even with Oli as China friendly Prime Minister can go for projects such as OBOR only while struggling to fulfill people’s day-to-day problems. Here China needs to realize the limitation of its old policy that was to push Nepal into its favour vis-à-vis “Indian hegemony”. Unless China is ready to re-open Kodari highway and encourage resuming other border linkages, Nepal’s dependency on India will be neither reduced nor will emotional blackmailing from Chinese side be useful anymore in Nepal. Eventually Nepali nationalists including media which are still having positive perception about China will change their pro-Chinese sentiments and start questioning Chinese side for any push China may try to make in future.