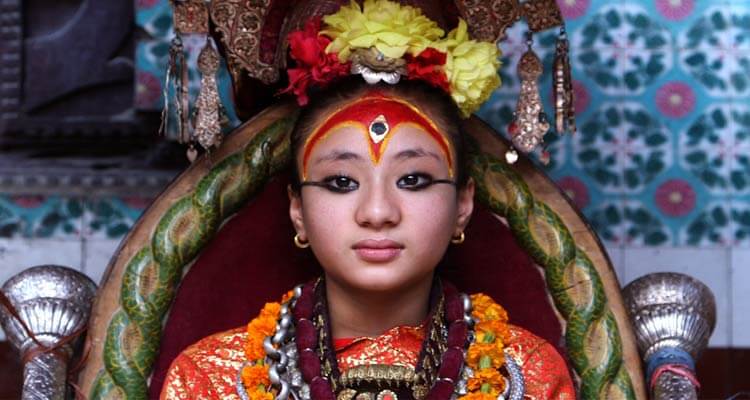 Before 2008, Nepal had been a Hindu monarchy in which the King and the virgin goddess known as Kumari had given legitimacy to the state. Now, Nepal is constitutionally a federal democratic republic formally committed to the propagation of secular ideals and the tradition of Kumari is still going on. There are around 12 Kumaris across the Kathmandu valley. Among them, the National Kumari (Royal Kumari) is most important one. Largely unknown to the outside world, it is believed that the single glimpse of the girl may bring fortune to our life.

There are many myths about the beginning of Kumari tradition. During 17th century, Kathmandu valley was ruled by the Hindu King who needed support from the predominantly Buddhist people and it was politic for them to worship a Buddhist girl to get blessings as confirmation of his legitimate right to rule the nation for the coming year. So, Kumari is selected from the Newar Buddhist caste known as Shakya, which was named after Lord Buddha. Atlhough Kumari is from a Buddhist family, she is a Hindu goddess.

Selection criteria of Kumari is strict and includes 32 physical perfection attributes such as an unblemished body, a chest like a lion and thighs like a deer, eyelashes like a cow , voice as clear as a duck and so on. Even if a girl fulfils all the physical requirements, she must then prove her bravery by not crying at the sight of a sacrificed buffalo. She needs to spend a night in a dark room containing the heads of sacrificed buffalos and goats without any fear.

Once the girl is selected as National Kumari, she must leave her home and families and take up residence in the Kumari temple where they are looked after by the state appointed caretaker. She should wear red dress, various ornaments like bangles and put on special paintings on their forehead that symbolizes her third vision. She can go outside only during the festivals, not more than 13 times in a year. Other people need to carry her as her feet should not touch the ground. She should bless 10-12 devotees each day.

The extreme social seclusion and restriction is for the maintenance of her purity. She assists the routine domestic tasks such as food preparation, clothes weaving etc. But it is not mandatory for other Kumaris who live more ordinary life as they live with their family homes and their parents and family members care for them and carry out most of the required daily rituals. Some of the Kumaris gets certain allowances and also a grant for their education even after their dismissal. They remain as living goddesses until some bodily imperfection that involves the loss of blood occurs, most commonly when they first menstruate some ten or more years later. 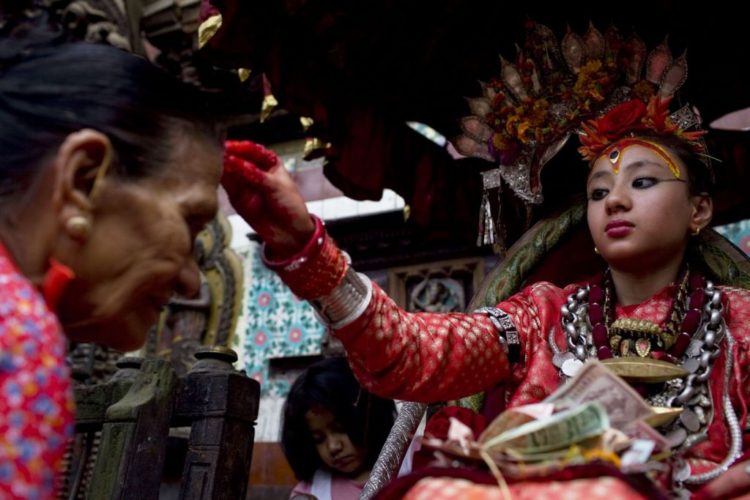 According to one ex-Kumari, her behavior was not in her control and she felt something supreme. People believe that it really exists with the reference of the intactness of her old residence during the devastating earthquake, at the same time the other surrounding buildings had been destroyed. People also believe that something dangerous power exists with her even after her dismissal. Therefore, it is difficult for her to marry because of the fear of the spouse and their family. They have difficulties in adjustment to the society after their dismissal from the long period of isolation.

The tradition has drawn criticism from child rights activists who say the Kumaris are denied a childhood and their isolation from society hinders their education and development. However, Supreme Court has already concluded that the role did not constitute child labor and did not restrict the girls’ freedom of movement. But the ruling did introduce compulsory education for the Kumaris.  In spite of the seclusion from society, they share happiness to have extraordinary childhood.

The tradition of Kumari symbolizes the cultural and religious history of the country. It also signifies the religious harmony in the country. But the extreme seclusion from the family from the age of 3 years may bring the psychological problems and also makes it difficult to adapt to the society after their dismissal. The traditions need to be modified in such a way that it doesn’t affect her freedom of movement and assemble and rights to choose food and dress. Most importantly, most of the families treat young girls in their families as a goddess and worship them in their own way.

A. Jeevan Shrestha is master student of Agriculture and Natural Resources, NCHU.